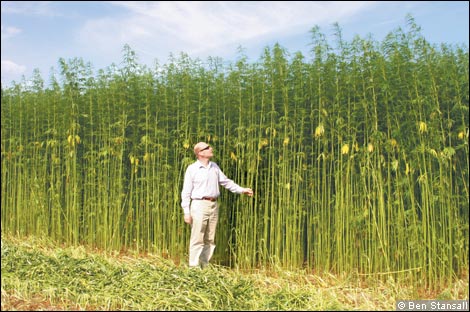 The recently announced ‘medicinal marijuana’ trials appear to be a first for Victoria. Harriet Shing MLC has been touting Gippsland as the ideal place to grow this crop -which it certainly is. Industrial Hemp should also be considered and promoted. Industrial hemp, with only trace elements of the drug component, should be seriously considered as a major crop across the region for two immediate benefits with regards climate change.

Firstly this crop may be able to partially or completely replace wood pulp obtained from logging our native forests. It is becoming increasingly clear that these forests must be preserved and protected as carbon stores and carbon sinks. To make sure that paper manufacturers don’t turn to destroying other native forests a practical and economic source of fibre should be found. Industrial hemp may be the perfect substitute. As well hemp may be used as bio-energy crop to produce either electricity or liquid fuel and biochar. Is it possible that hemp can be cultivated as “carbon negative” product – that it can actually draw down more carbon than is used to produce it and sequester it as ‘biochar’? There are a wide range of other uses of this plant including food, clothing, building materials and products used in the car industry. It would appear that almost every part of the plant can be utilised.

Industrial hemp as a crop is not catholic in its tastes and can be grown on a wide range of soils with minimal inputs of fertilisers etc. But at present there are too many barriers to its cultivation including a restrictive licencing system and a status quo that treats all hemp varieties as a harmful drug. Perhaps the new Victorian trials will change this. What is needed is some information on the economics of Industrial Hemp cultivation and whether it can actually provide any of the claimed climate benefits.

Historically, in the late Nineteenth Century the flats of the Mitchell and Tambo Rivers grew hops, hemp and opium poppies. These crops were probably cultivated in many other places in Gippsland. Perhaps it is time that industrial hemp is given a decent trial free from all the encumbrances of bureaucracy.