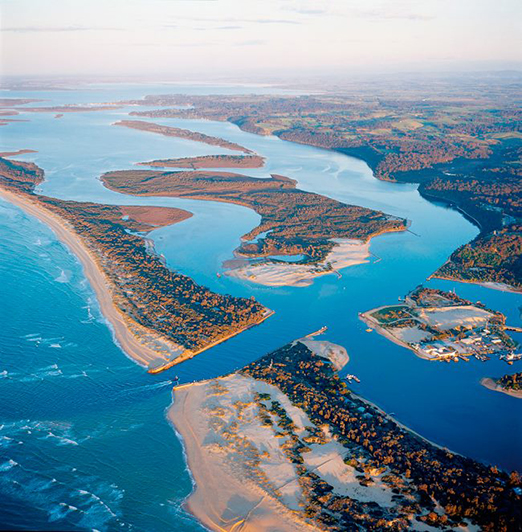 I attended the morning session of this forum run by the East Gippsland Catchment Management Authority (EGCMA) held at Forestech, Kalimna West. A barrage of highly qualified speakers had excellent presentations with only very brief periods for question time or debate – in effect a one way process rather than an “exchange”. To me Climate Change was the “elephant in the room” though mentioned by at least 2 speakers one wonders why there was not a presentation precisely on this subject in relation to the Gippsland Lakes.

Engineer Rex Candy of the EGCMA and his organisation, to their credit,  have used the phrases “climate change” and “sea-level rise” for some time even though the local public is still resistant to their usage. They tend however to treat this as just another influencing factor rather than the overwhelming problem that it is. The marvellous work by Martin Potts on revegetation at the Western end of Lake Wellington, and the work by other academics on algal blooms, salinity, invasive and threatened species will all be lost if we face anything like worst-case scenarios of sea level rise.

Professor Paul Boon in his presentation about his studies on ‘salt tolerant phragmites’ mentioned climate change and “sea level rise” several times. His presentation gave a brief geomorphological history over the last 20,000 years and pointed out that sea level rises had risen 120m during that time and the level have been relatively stable over the last 4000 years. He also pointed out that the sea-levels were currently rising by about 3.5mm pa and briefly mentioned a possible 1m rise in 100 years.

This prompted a question from the audience that included a calculation based on the long term sea level rise comparing it with the current rate. The questioner calculated that the average sea level rise over the 20,000 year period Boon used was 6mm pa. Based on his calculation he then inferred that the current annual rise of 3.5mm was not so bad. The comparison he made is fallacious for a number of reasons. One is that there were no civilisations or coastal cities when those seas were rising. But the main reason it is faulty is because it assumes a neat linear progression in rising sea-levels and takes no account of abrupt changes.

A number of experts from James Hansen down have pointed out that the essential figure in the sea-level rise is the period in which the rate of increase doubles – that it is decidedly non-linear. For example the average annual rise in the last century was 1.7mm. It is now double that. If the rate at which the sea was rising was to double every 30 years or so this would present us with catastrophic outcomes. I have gone into this in some detail in my slightly dated essay on the Gippsland Coast in 2100 (downloadable pdf on Publications page) where I consider a number of other factors including subsidence, storm surge and Bruun’s law of coastal retreat as well as sea-level rise. Should anything anywhere near approaching worst case scenarios of climate change and sea-level rise eventuate this will make much, if not all, of the valuable work presented at the forum redundant.