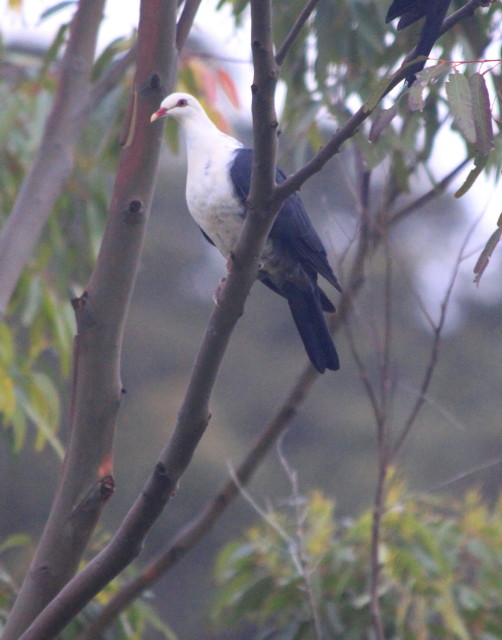 Previously I have emphasized the overwintering of the grey headed flying foxes on the Mitchell River in Bairnsdale as a sign of global warming. However it is possible that gradual warming is only one of a number of reasons that the population, which previously left during the winter, appears to be coming permanent. But there are plenty of signs of the warming on both land and sea. A variety of different species are responding to the warming. It is amongst readily observable species – in particular birds – that are obviously extending their inhabitable regions southwards as the planet warms. Climate Change a CSIRO publication by Holper & Torok (2008) noted “that climate change is forcing the location of species towards the cooler poles by an average of 6km per decade”.

At our shared holiday house at Lake Bunga the White-headed Pigeon(Columba leucomela) has recently made an appearance. One of our members noted that “Due to effects of Climate Change this once rare visitor to Southern coastal Australia (Victoria in particular) is now a regular visitor to our area, nesting and raising young on the foreshore of Lake Bunga”. In suburban Bairnsdale we regularly listen to the distinctive call of the male Common Koel (Eudynamys scolopacea) now a visitor for the third summer in a row. According to Simpson & Day’s Field Guide to the Birds of Australia (1986) both these species were to be found only as far south as southern NSW.

A well-known Gippsland biologist has listed a number of avian species that are either new arrivals or visitors as they extend their range southwards at least partially in response to the warming. His list includes both the Common Koel and the White Headed Pigeon but also the Channel-billed Cuckoo (Skythrops novaehollandiae) “similar to the Koel in its range, but now been observed more frequently further west”; the Osprey (Pandean haliaetus) “up till 15 years ago, a very rare sighting in Victoria”; and the Scarlet Honeyeater (Myzomela sanguinolenta) “A bird of northern NSW and Qld, now often being recorded in Vic as far as Melbourne”. He cautiously noted that the colonising of the “rainforest species…may not be all climate change, but forest practices and changes to vegetation structure that has forced them to move further south for food. It is probably both.”

Whilst the sighting of these new species may be an enjoyable occurrence it is also a harbinger, a warning sign, of other more harmful things to come. Their arrival is telling us that action on many fronts to mitigate and adapt to climate change is required now.