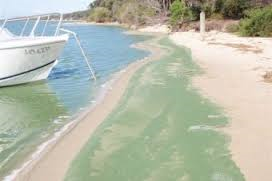 Vic Health have just (8.2) issued an advice warning against the consumption of shellfish in the Gippsland Lakes. They are also examining whether fish species may be contaminated by the current bloom. Lakes Entrance is primarily a tourist town and secondarily a port and fishing village. Without the tourist trade, which is estimated at being worth $2.8 billion, the whole of the Gippsland economy is undermined.

Algal blooms are a direct and immediate threat to the economy and are directly related to climate change and other changes to the Lakes system. Some forms of algal bloom, such as blue-green algae, make swimming hazardous and the consumption of shellfish and fish equally so. When the bloom dies the smell of it rotting may be intense as in 1983 when it could be smelled in Bairnsdale for a number of weeks which may be just another possible Tourist distraction to follow the actual bloom.

Algal blooms can flourish with a number of factors one of which is warmer waters, which in turn is a direct response to our warming planet. The shallow waters of the Lakes are warming faster than our oceans which in turn are already warming faster than our land. Climate change also affects other aspects of Algal blooms in a number of ways. Increasing the intensity and frequency of droughts leads to increases in salinity and water stratification which favours the algae and floods can also supply extra nutrient for the blooms.

The US EPA website noted: “Algae need carbon dioxide to survive. Higher levels of carbon dioxide in the air and water can lead to rapid growth of algae, especially toxic blue-green algae that can float to the surface of the water” and “Climate change might affect rainfall patterns, leading to alternating periods of drought and intense storms. This can cause more nutrient runoff into waterbodies, feeding more algal blooms.”

A Gippsland ecologist commented: “that the incidence of algal blooms in the lakes has significantly increased since 1986, and also, the demand for water for drinking and irrigation is at best constant, but all river flows have diminished in the past 30 years (Gippsland Sustainable Water Strategy) so there is less flow, and what is flowing is of a higher nutrient content, and Governments are continually promoting increased agricultural output, so the only thing to wear all of this is the Lakes system. The algal blooms are an indicator of an ecosystem under stress, exacerbated by climate change and that deeper entrance.”

A number of changes directly affected by climate change are threatening Lakes tourism – algal blooms are currently pre-eminent but this also includes bushfires and floods. The latter events combined with sea-level rise and possible subsidence makes Lakes Entrance probably the town in Australia most vulnerable to global warming. For more on the blooms and climate change go to http://www.epa.gov/nutrientpollution/climate-change-and-harmful-algal-blooms