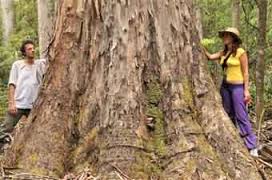 The first of the Victorian government New Energy Jobs Fund forums was held on January 29 in Bairnsdale and was attended by about 30 people. This Fund will be providing $20m over 4 years to various renewable energy projects in communities and manufacturing and is a great idea to begin with.

But because the burning of timber waste to generate energy is currently included in the Renewable Energy Target (RET) projects of this nature are also included and thus eligible to apply for funds. In many ways this defeats one of the main purposes of the NEJF – to draw down on our carbon emissions to the atmosphere. It is becoming clearer by the day that our native forests must be protected and preserved as best possible as a carbon store. Claiming that burning waste from the logging industry is ‘renewable’ is false and the entire logging process produces far more greenhouse gases than it saves.

One problem is that ‘logging’ remains a major employer in the bush as opposed to the regional centres. There is a need to phase out logging as quickly as possible but with a minimum of hardship on small communities. If the forests were properly protected they would provide far more employment than the loggers currently do. They should improve employment prospects in the bush.

I have previously suggested that private landholders be remunerated for the carbon they store on their property in the form of bush lots and substantial trees (soil carbon is currently in the too hard basket). How this could be done is unclear but implies that any trees so funded must be preserved. One of participants at the forum – obviously pro-logging – replied when I suggested to him that landholders should receive a rent for the carbon they are storing by not logging replied that they could receive compensation for storing the carbon and then still harvest the timber. Such double dipping would be unacceptable and inappropriate in the extreme.

On the upside there are plenty of attractive schemes like the Gippsland2020 – Segue Café project in Stratford and the Earthworker heat pump manufacturing scheme which will hopefully be moving to Morwell soon. The Bairnsdale forum was attended by a small group from the Valley who asked for a similar forum to be held in Morwell. It seems obvious that the projects that most need support are those that provide jobs where they are wanted. There are obvious places such as Moe and Morwell that have never really recovered from the privatisation of the SEC. The valley in general will need substantial planning and support preparing for the time when the brown coal generators are closed down. Less obvious places in need of renewable energy projects are the small timber communities spread widely across the region already suffering as the logging industry continues its long term decline. For more information go to http://www.business.vic.gov.au/support-for-your-business/future-industries/new-energy-technologies