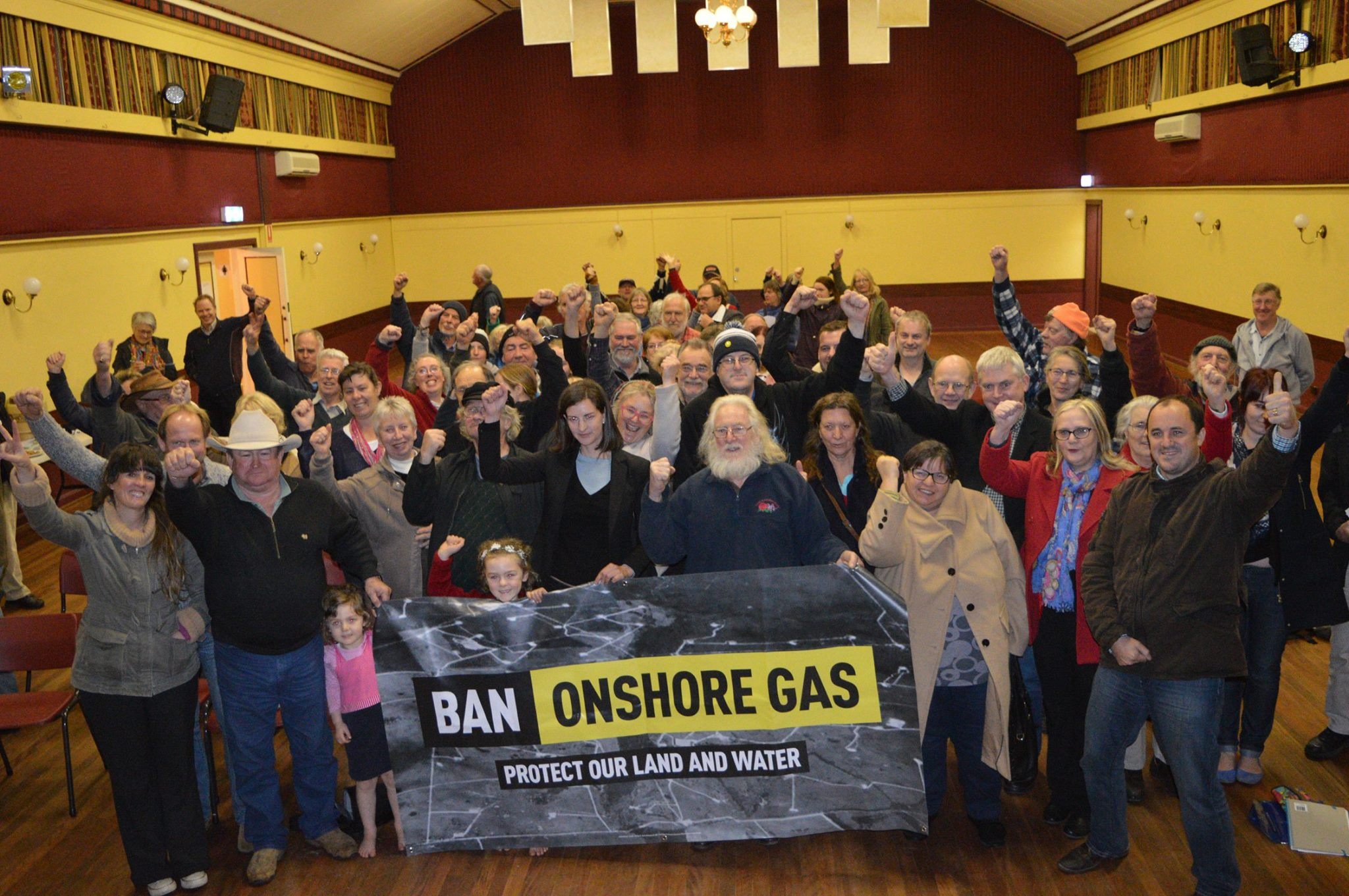 Recently over 70 people, concerned about the threat of onshore gas extraction, met at the Mirboo North Shire Hall to hear from NSW MP Jeremy Buckingham and Gunnedah anti-fracking activist farmer, David Quince. Ellen Sandell, (MP Greens Melbourne) facilitated the meeting. It was an opportunity for locals to hear about the NSW and Qld experience – a timely reminder of the difficulties communities suffer in areas where the gas industry is already well entrenched, highlighting Victoria’s unique position in having the power to make an informed decision on the future of the industry here.

David Quince pointed out the serious problems Qld communities have had with this industry as it’s sprung up unchecked in their midst; aquifers ruined, contaminated water, families forced to sell out to mining companies with no legal protection. The Liverpool Plains in NSW is a perpetual battle ground with the community versus CSG proponent, Santos. He reiterated the fallacy of a gas shortage (most onshore unconventional gas is for export to Asia), the huge donations by gas companies to political parties and the lucrative job offers to politicians taken up by members of both major parties.  David went on to tell us that Bass Strait has an unlimited supply of offshore conventional gas and can be used for all our gas requirements.

This caused consternation in the audience as we know Victoria has no more than 30 years of offshore gas left (a good window to develop alternate energy sources). The implications of David’s assertion provoked an intense reaction from those living along the east coast near Seaspray; their despair and frustration was almost palpable as they’ve been subject not only to onshore unconventional gas wells, (immediately operational if the onshore gas moratorium is lifted), but also by the offshore conventional gas industry, with its inherent, often invisible problems – coastal subsidence, salinity and aquifer depletion being major issues that our NSW guests seemed unaware of. Toongabbie activist and farmer, Tracey Anton has warned that, “If we allow decades more of offshore conventional gas extraction, we will have wiped off half the Gippsland Coast and destroyed an agricultural future.”

To compound the problem, Mr Quince was heard the next day on ABC radio asserting, again, that there is an “unlimited” conventional gas supply offshore…The tone of this narrative demands change as, in Victoria, a big push by mining lobbyists to not only have government lift the moratorium on unconventional gas, but also to allow conventional onshore gas, a process that uses horizontal drilling without fracking, is underway. This push is endorsed federally by the Minister for Energy and Resources, Josh Frydenberg.

The Gippsland community were most appreciative of Jeremy Buckingham and Ellen Sandell bringing the “Ban Onshore Gas Victorian Tour” to our region, and reminding us of the dangers of this toxic industry. The warning that co-existence is impossible and social licence should never be given to this industry came through loud and clear. Ursula Alquier, Lock the Gate Victoria campaign manager pointed out that the success of the Victorian campaign was relative to a non-partisan ethos which brought together people of all political persuasions working together to bring about a total ban on the onshore gas industry.