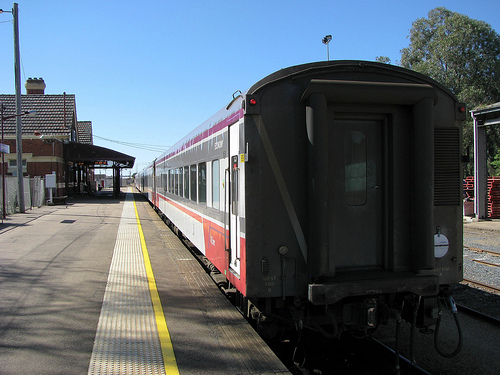 I have been a public transport user for most of my life – both in Melbourne and in Gippsland. When living in the hills a trip to Melbourne – an 80 minute bus trip plus four hours on the train each way – meant an overnight stay and thus was used less frequently. Since retiring to Bairnsdale the train has become more accessible and has made the day trip to the city, if a long tiring one, possible.

Recently a citizens jury (Is this a means of transferring responsibility?) recommended that the Gippsland line terminate at Pakenham. This would force country travellers to change trains and add a substantial period of time to their journey. For many of them this is already a long trip. On the surface it seems just another plan to make the service a bit less user friendly than it is, and rightly raised an outcry amongst locals.

Public transport has generally been allowed to run down, privatised where possible, with insufficient maintenance and few, if any, improvements. A new bridge over the Avon River at Stratford, for instance, has been needed for a very long time. Also some of the Traralgon trains could be extended to Sale with connecting services to Bairnsdale. No doubt there are many other suggestions to improve the service

Earlier this year whilst attending a climate change rally in Melbourne our train had some unforeseeable delays – once it reached the suburbs it had to squeeze in between suburban train times of an already crowded service. Stopping and starting frequently the train arrived almost 2 hours (though with time for the march) late.

In terms of greenhouse gases public transport – even diesel powered locomotives – has always been the most sustainable means of travel. Any long term disruption to services that puts more cars back on the road is a step in the wrong direction. It is obvious that both city and country public transport requires a massive injection of funds. Perhaps it is also time for a dedicated Gippsland Line.