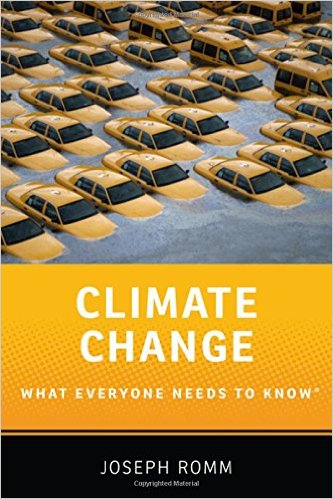 A copy of Climate Change: what everybody needs to know (Oxford University Press, Melbourne, 2016) by Joe Romm has recently been purchased by the East Gippsland Shire Library. The book is a basic primer on climate change for the general public and is recommended. It is structured around ninety-seven questions divided into 7 chapters and a Preface.

The chapters include Climate Science Basics, Extreme Weather and Climate Change, The Role of Clean Energy and Climate Change and You. The Preface begins with the question ‘Why you need to know about climate Change?’ and after dealing with it in some depth concludes “In the coming years, climate change will become a bigger and bigger part of our lives. It is literally the story of the century, and, for better or worse, you and everyone you know will increasingly become part of that story. Here is what you and your family need to know to navigate your future.” (xxi)

The Climate Science Basics chapter commences with the obligatory ‘What is the greenhouse effect and how does it warm the earth?’ and includes “How does deforestation contribute to warming?” and “Why does the rate of warming appear to vary from decade to decade?” The answers are succinct – seldom more than a page or two long and are sometimes illustrated with graphs or maps.

Much of the material I am familiar with but the chapter on Extreme Weather and Climate Change is of personal interest as it is this aspect that is affecting us now. Questions such as “What is the difference between weather and climate?”, “In a warming world why do some winters seem unusually severe?”, “How does climate change affect heatwaves?” and “How does climate change affect wildfires?” are all relevant and applicable to Gippsland today.

Romm concludes with the question “Do we still have time to preserve a liveable climate?” and is relatively optimistic (though perhaps now less so with the election of Donald Trump after publication) about humanity’s ability to solve the problem. I have refrained from quoting Romm’s answers to the questions and you will have to borrow or buy the book to do so. If the latter it will be money well spent. This book will be particularly helpful to any of those local journos who after an unseasonal fall of snow or a few cold days think climate change is, in the words of a recent prime minister, crap!

*Joe Romm has PhD in physics and has been a regular writer and blogger on climate change for many years. His blog is published regularly here.