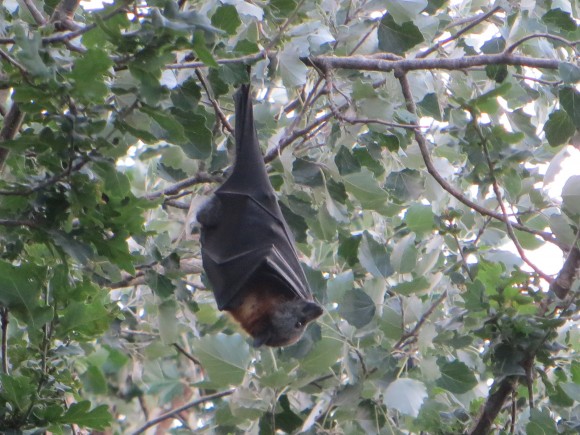 I live a few hundred yards from the Bairnsdale flying fox colony and have been a regular observer of them for the last four years. On or about the third week of January the regular (permanent?) colony grew in size suddenly from 10,000 by about four or five times. Some estimates of their numbers have been as high as 70,000. From the resident population near McCulloch Street they now camp along the river right into town and occupy the tops of the 100 year old plain trees that line the river. The reason why this sudden increase in population occurs is as yet unexplained. As a threatened species the grey headed flying fox is protected.

I have written about them previously here and here and have argued that their continued presence may be another sign of global warming. The recent population growth has had residents complaining about noise and possible communication of disease and was front page news in our local throwaway the East Gippsland News. This week in the Bairnsdale Advertiser there were two letters in defence of the flying fox – one claiming that you were 1000 times more likely to be struck by lightning than getting any disease from them.

In the recent heatwaves in SA and NSW flying foxes started dropping dead in Adelaide and Singleton as they also did in Bairnsdale in the summers of 2012-13 and 2015. The flying fox is extremely sensitive to heatwave temperatures as is homo sapiens sapiens and it is enlightening to compare them. The 2009 heatwave preceding Black Saturday is, using mortality figures, estimated to have caused 400 extra deaths. More recently ‘attribution science’ is now saying that the events of February 2009 were at least 17% more likely because of climate change.  Does this mean about 20% of these people died because of climate change? If so this would give us more than 100 fatalities directly caused by global warming if we include the poor souls burnt on Black Saturday. Such extrapolation from one set of data to the other is hardly legitimate. What is clear is that the climate change influence in this one event in 2009 killed far more people than the handful killed in more than 100 years of terrorist acts in Australia.

The flying foxes are quite mobile but have more or less reached the southern-most possibilities of extending their range in response to warming. It also represents a wide range of other mammals and living things threatened by climate change that are entirely innocent of its cause and have nowhere to run or hide.  A large part of mankind remains ignorant and unaware of human caused climate change. Fewer still are prepared to act against the inertia of the status quo and the criminal activities of the vested interests opposing any action. Each heatwave fatality is a victim of human folly and the demise of each flying fox heralds our own.