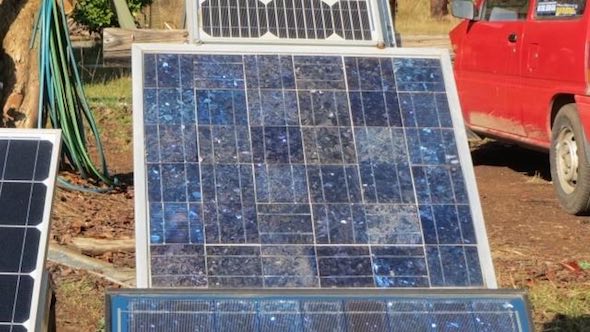 This abridged version republished with permission of the author. For the full article and photos go to OneStepofftheGrid

I have been off grid for over 30 years, starting with just one 40W panel made in Australia from American components. That panel must be close to 40 years old, as the builder of my place fitted it when they first moved into the house – there were 5 x 12V neons powered by this, via 6 x 2V ex-telecom 12V batteries. The regulator was a zenar diode and a heat sink.

Above is a photo of the old panel, which still manages to put out 19 Volts on a sunny day, and charges my 12V power tool batteries, etc., via a $12 Chinese regulator. This panel originally cost over $400. The second panel I bought was a factory second, and only lasted a few years. It puts out only 9 Volts in full sun now. There’s also a tiny 12V 10W panel which just charges small batteries or maintains bigger ones.

I do all my house lighting from a few other 12V panels / batteries powering 12V LEDs without the need for inverting. All my other power needs in the house are via 2000W @ 24V, 4x 256 a/h AGMs and a 3000W continuous inverter (Powerstar 7) which has been faultless in reliability and performance, costing under $600 delivered in 2012. And still for sale now at that price from various brands.

I have, now, all the appliances I only used to dream of in 1989, like an electric fridge, a washing machine, e-bikes and trikes, power tools, etc. I’ve had to add to my system in bits and pieces, and now have built an almost solar powered welder (just got to wire in the other four panels to complete the job) and a workshop power supply on a tiny trailer set-up which runs my fabricating needs on a rural property 100km from the shops.

Now an age pensioner, I am struggling a bit to finish all I have started, but I hope to get there soon, for the next generation to get the benefit. I have done all my own system design and installation – for a total cost so far under $15,000. That includes my own mobile internet access point, as the Broadband Guarantee and NBN systems were, and are, a sad financial and functional disaster.

The thing which blows my mind – where have our movers and shakers been for the last thirty years? Maybe on a planet that has unlimited growth potential, like the fairyland inhabited by the bankers and economists who are hell bent to send us into terminal decline via over-exploitation of everything?

How is it that an old man on a tiny income can do this, when the rich and famous are failing utterly in their endeavours, unless their agenda is to destroy all? With marketing expertise they have generated and exploited fear, greed and ignorance – to enrich themselves in the short term, I suppose.