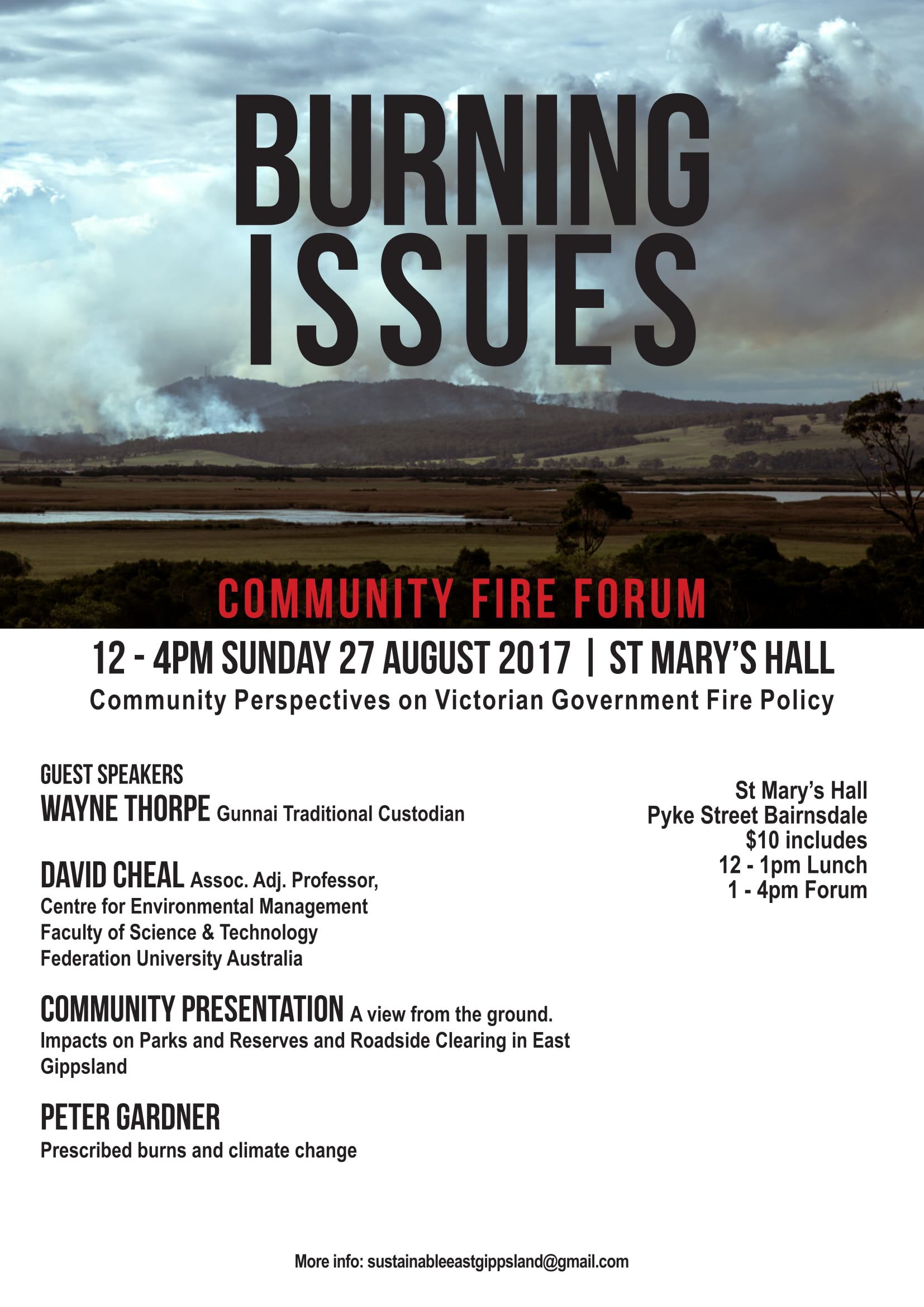 I have been asked to present a brief talk on burning and climate change to the Community Fire Forum in Bairnsdale today. Presumably I have been asked because of my frequent pieces here on the burning question in Gippsland. By necessity I must emphasize that Climate Change is much more than an environmental problem.

As I have outlined here frequently I consider it an existential crisis threatening the whole of humanity. I intend to go through the basic physics of the Greenhouse Effect with the brief history of Fourier in 1827 whose calculations suggested the earth should be 30 degrees colder than it was (without the greenhouse effect the earth would be a ball of ice) through the important works of Tyrell and Arrhenious emphasizing that we work on best science.

The greenhouse effect means that as the gases are increased the temperature of the earth increases. The last 10,000 years, known geologically as the Holocene has seen benign temperatures in which civilisations developed. Since the industrial revolution with the combustion of coal, and later oil as an energy source, the greenhouse gases have been steadily increasing and the average temperature of the earth is rising. There are a number of eminent scientists – James Hansen, Peter Wadhams – who consider we are already in a climate emergency.

So what has this to do with our forests? Forests are one of the major stores of carbon on the planet. When burned – like fossil fuels – they produce greenhouse gases. All burning produces energy, usually in the form of heat, and carbon dioxide. There are currently a number of burning practices involving the local community which produce greenhouse gases – controlled fuel reduction burns, logging coupe burns and bushfire prevention and control.

Most of these practices were established well before climate change was seen as a problem. Now it is obvious that the practice of clear fell logging is essentially harmful with their contribution of greenhouse gases outlined below. The practice only continues because of the status quo and the influence of big business. With regards controlled fuel reduction burns, once clear fell logging is terminated the need for it will be considerably reduced. The question remains whether these burns protect the forest from severe or crowning bushfires. No doubt there will still be the need for some burning for protection of property and person.

I have used the example of the burning of logging coupes in a recent blog. There I calculated that for each hectare logged of mature ash forest and with coupe burned produced a minimum of 1700 tons of carbon dioxide. If a nominal value is placed on this pollution of $30 per ton as in the carbon tax, then the value, or subsidy if you like, is over $50,000 per hectare. Multiplied by an average coupe size of 24 hectares sees a ‘value’ of over one million dollars.