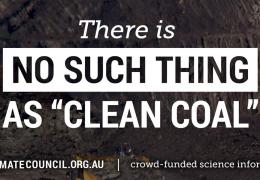 When asked about critical aspects of climate change our Lib/Nat pollies procrastinate and either refuse to answer the question or waffle on with the same end result.  But they are either following the party line (often deviously so as not to put off voters) or they do not understand the science, possibly both. A typical example is local member Tim Bull for Gippsland East who says that he accepts climate change but that the jury is still out on whether it is natural or not. In fact this is mere flummery trying to disguise an anti-science line by his party. It is his way of toeing the line. It is therefore a priority with anyone concerned with the urgency of global warming to expose this. This in turn requires the individuals who are asking these questions to quickly understand when the answer is scientifically incorrect, evaded or ignored.

Mr Bull the jury is not ‘still out’ on whether the global warming is natural or not. This is an argument of the status quo or ‘do nothing’ school – that because it is natural you can do nothing about it and therefore no political action is required. This argument is the main fall-back position of the climate deniers. The fact that our warming planet is caused by human activity has been accepted by mainstream science for many years and is grounded on the basic physics of the greenhouse effect. The greenhouse effect, in turn, has been known for nearly 200 years and the details and measurements of the ‘effect’ have been refined over the years. It is the governor of earth’s climate and increasing greenhouse gases in the atmosphere means the earth’s temperature will increase.

It has been noted that the BBC is now giving courses to its journalists on how to handle and ask questions on climate change which presumably includes the basic physics. Energy commentator and sustainability expert Alan Pears argued in this month’s Renew that our leaders need to be re-educated on climate matters: “But many of our leaders just don’t seem to grasp these principles. Maybe we need to set up remedial education for our leaders in basic physics…Senior managers in the ‘top 100’ businesses could also be included. And senior public servants.”

Whenever a government sympathetic to the science is elected they should immediately embark on a massive education program on the basic physics of climate change for the whole public. This is something that was missing from the Gillard government, and also missing from progressive Labor governments in South Australia and Victoria. It is only by such campaigns that the financial power of the vested interests can be matched and overwhelmed. Then, perhaps, we will get the action that is necessary.