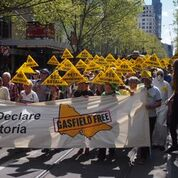 As a member of Gasfield Free Bairnsdale (GFB) I was attending the Melbourne rally to carry the “Bairnsdale East” yellow triangle as farmer (Leanne) was unable to attend. On the 7.50 am departure of the Gippslander from Bairnsdale spread throughout the train were Bill (farmer carrying the Broadlands triangle) Paul (a green) and myself plus some youths – Harry (AYCC) and Aaron who were unaware of the rally but (I think) persuaded to attend.

The train journey was enlivened at Sale by the addition of a substantial contingent from Seaspray, Sale and Maffra with more joining in Traralgon, including former greens candidate in Morwell Dan Caffrey. The Seaspray people – arguably the most threatened area in Victoria with unconventional gas development – were loud, highly visible with their signs, badges and t-shirts and intent on having a good time.

On arrival at Flinders St Bill remarked that it was the first time he had been in the station for 50 years. We caught the tram to the library where amongst the sea of yellow triangles he met his daughter-in-law and 2 grand-daughters, there to help him carry the banners. I met my close friend and long term climate activist Andrew (see http://www.feedbackreigns.net ) who between us have shared editing climate newsletters for about 5 years. A few others turned up including Ivan and his wife from Nungurner.

MC for the event was our GFB co-ordinator Debbie Carruthers and after a few speeches, including by Lock the Gate founder, Queenslander Drew Hutton, we set off down Swanston St chanting “Hey Hey, Ho Ho Coal Seam Gas has got to go” (and other slogans) amongst a horde of media personnel. Carrying my locality sign I walked beside Dan Caffrey (Tinamba 99%) and the sign bearers of the other 65 CSG free declared localities in Victoria. I started to tire a bit up Burke St and by the time we reached parliament stumbled on the steps.

Here 2 farmers (including Trevor Flint of Seaspray) made impressive speeches and the names of all the communities that had declared their localities gasfield free were read out. We then formed a rough triangle for the last photo opportunity. The crowd was estimated at 2000 and impressive enough. Andy and I headed back down Burke St where I was revived with lunch and cold drinks and we spent a pleasant afternoon catching up with our news.

Back in Flinders St waiting for the Gippslander I chatted with a fellow protestor – Des from Sale who was quite a bit older than me – about our experiences for the day and how we were wearing. The train was full and I was tired, farewelling the Seaspray/ Sale crew about 9pm. About 10.15pm I was home (and in the vernacular “buggered”). Andrew had already relayed the good news that the event had made quite a splash on TV. A perfect ending to a great day.