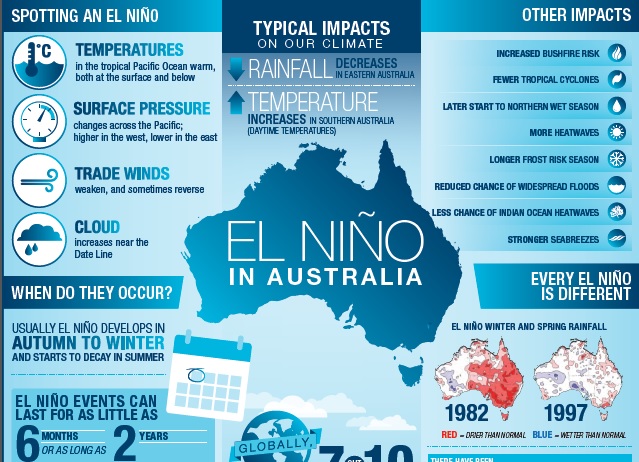 There continue to be loud protests from certain sections of the social media confusing weather and climate. Because Gippsland (or most of it) has been experiencing above average to very good rainfall then the predictions of the weather bureau about a super El Nino and a subsequent dry are all ‘rubbish’. Regardless of how adamant these claims are they remain anecdotal.

For what they are worth my own memories (anecdotal accounts) are also of rainfall rather than heat. 1983 and 1997-8 are generally listed as the previous super El Nino years. Both ended in the Omeo district as relatively shorts spells that were very dry. Preceding Ash Wednesday in 83 the Tambo River was completely dry for long distances – sometimes going for kilometres before even a small pool could be found. The Little River, a short and reliable stream, stopped in the town of Ensay for the first and only time in living memory. 1997 does not stand out as being dry but the first 4 months of 98 were again ‘bone dry’. Stock feed disappeared and small sand dunes formed in the lee of the hills following a dust storm in late April. In June the short drought broke when we received half our annual rainfall in one month – most of it in 3 days.

With climate change, which has been gradually happening since the industrial revolution, science predicts an increasing number of extreme weather events. That is what both the drought and the flood in the Omeo district in 1998 were. These events were directly related to El Nino and probably heavily influenced by climate change.

El Ninos also enhance the warming effect and 1998 was the warmest year to that time. It now appears that 2015 will be the same. El Nino events themselves must in turn be enhanced by a warming climate and the connections between these events and climate change are not clear. It is obvious though that climate change must also influence the El Ninos as it does extreme weather events.

For each degree of warming the planet’s atmosphere holds an extra 7% of moisture. This in turn means more rain, probably in heavier rainfall events, and more electrical storms. But the hardest thing of all for the weatherman to predict remains where the rain will fall, and when, and how much rain we will get. For more on the current El Nino go to http://www.bom.gov.au/climate/enso/