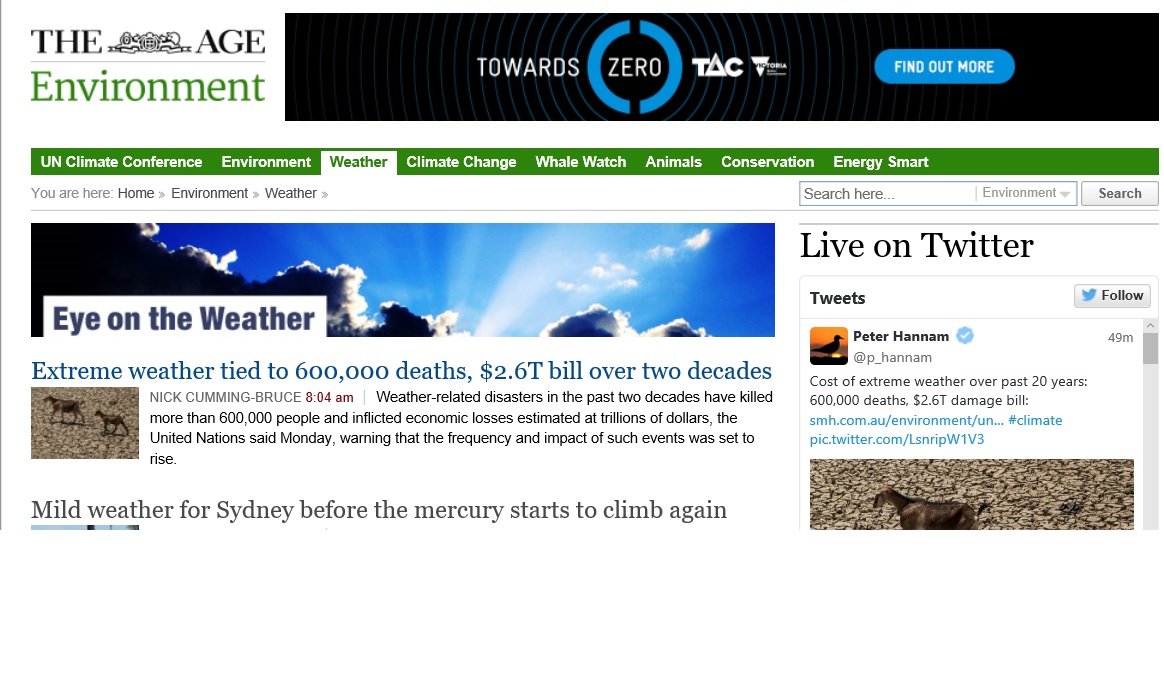 The Melbourne Age remains by far and away the best of the local printed media (possibly all media except social) in its handling of the huge problem of climate change. On the plus side they have regular features and news items by excellent journalists – in particular Peter Hannam, Tom Arup and Adam Morton. The letters columns are also equally informative sometime more so than the rest of the paper. Also they occasionally editorialise in favour of some action on climate. It should be noted that they have no competition – the Murdoch press is still operating in the Dark Ages.

On the downside we have to tolerate the climate denialist cartoons of Spooner, occasional put downs from the Institute of Public Affairs regular column, and worst of all, giving opinion pieces to outrageous Climate Change deniers in the guise of balanced presentation. A recent example of this was a piece by Christopher Booker attacking the upcoming Paris talks as a waste of time. (The Age 3.11) I found this distressing in the extreme and went so far as to threaten to cancel my subscription.

The problem is that the Age persists with the false dichotomy of balance and debate. There is no debate about anthropogenic climate change. The science is well established, documented, and various indicators including land and sea based temperature rises are occurring exactly as predicted 30 years ago. Since the science is 97.5% sure (perhaps even 99%) the Age should present 98 articles to ‘balance’ each item of scientific illiteracy by Booker and his ilk. To present Climate Change as a ‘debate’ – both for and against – is itself a grand distortion and can be likened to arguing about gravity or the shape of the earth.

Where are the front page headlines informing the public that the October just past was the warmest ever recorded in Victoria, Australia and the Earth? Where are the investigative pieces outlining worst-case scenarios of climate change on security, refugees, health, food production and the life threatening heatwaves, bushfires, droughts and floods? Where are the headlines specifically linking climate change with our gradually expanding bushfire season? Or examining how warming influences El Nino? And many other questions far too numerous to mention.

The Age emphasises the momentary (a murder) the parochial (Essendon Football Club) and false balance. They appear too timid to get too far ahead of their opposition – many of whose journalists are probably criminally negligent – instead of leading public opinion. As a long term reader my subscription remains, but only just.