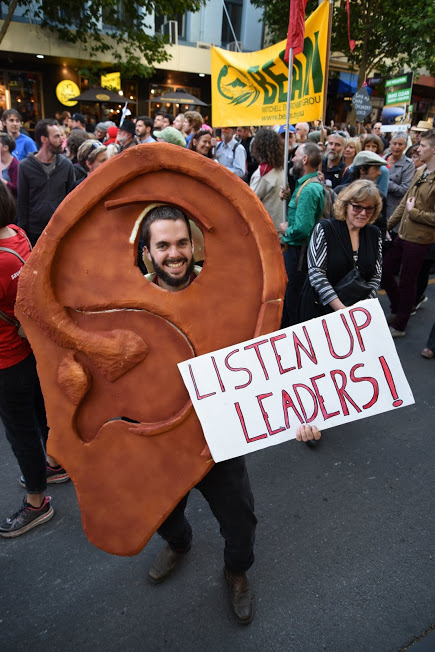 The late afternoon timing of the Melbourne People’s Climate March allowed me to take the mid-day train from Bairnsdale. But ‘Murphy’s Law’ was in control and following delays in Sale and Rosedale the train ended up 75 minutes late. Being joined by members of the Latrobe Valley Sustainability Group in Traralgon made the journey pleasurable anyway. ‘Lock the Gate’ and ‘Baw Baw Sustainability Group’ people also joined the train along the way.

I left my train friends at Flinders St as I trotted up Swanston to meet another just as the march was about to start, led by some young Kooris. By accident I ended up as a “ring-in” singing with the ‘Trades Hall’ and ‘Home Brew’ choirs. We sang from beside the march between Lonsdale and Bourke as the marchers went past. From start to finish – with a few stops and shuffles – they took about 45 minutes to pass and must have covered 2 to 3 blocks. As there were only 2 songs, printed words (You knew Grandpa you knew Grandpa / Tell me what did you do?) and a leader with squeeze box everything went well, we sang till we were nearly hoarse, the marchers often applauded and we joined at the tail end. Being late to start and on the end we missed most of the speeches.

The media response, with exceptions, was generally poor. This may partly be because of the timing of the event in the case of the visual media but there was no excuse for the sparse coverage in the printed media. As far as I am aware there was nothing much on Television, a page 8 article in the Saturday Age with an abominable estimate of numbers (hard to believe the journo was there for more than a few minutes!) and nothing at all from the climate criminals at the Herald Sun. There were no aerial views to show how big the march was – how many blocks it covered. The Guardian gave a fair online coverage with a crowd estimate of 40,000 which approached the organisers estimate of 60,000 plus. As a veteran of the Vietnam Moratorium Marches of 1970 -72 I estimated the crowd at about 50,000 and comparing favourably with some of the old marches – except the massive first Moratorium in May 1970 – an event I was unable to attend as I was overseas.

The Melbourne March was the first of an estimated 2000 events around the Earth to precede the Paris Conference. As I write this the marches are still happening. Saturday saw marches in Brisbane and Auckland and another 30 places around New Zealand. Sunday will feature marches across the remaining capital cities of Australia and include a local march from Phillip Island to San Remo across the bridge. A wonderful folio of photos of the Melbourne March taken by Peter Campbell of Victorian Climate Action Network can be viewed here https://goo.gl/photos/ay1cE4S7dRN3vfsY9