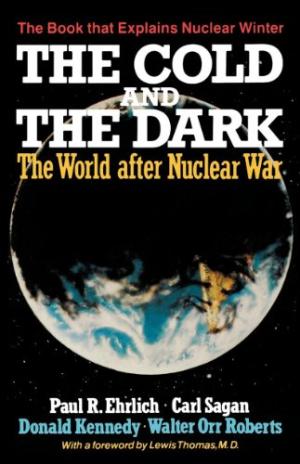 By nature I am a loner, an outsider, and definitely not a party political animal. However  the publication  of The Cold and the Dark: the World after Nuclear War by Carl Sagan et al (1984) and other material on the ‘nuclear winter’ influenced me to join the Nuclear Disarmament Party (NDP) and stand as a candidate on this single issue. In the federal election in 1984 I stood for the NDP in Gippsland, campaigning solely on the threat of the ‘nuclear winter’ and received about 5% of the vote. The following year the party split and I, along with about 30 others, departed.

Over the years it became increasingly obvious that the opposite of ‘nuclear winter’ was global warming. I was aware of this but remained preoccupied with the threat of nuclear war throughout the 80s and into the 90s although once or twice I penned the words “global warming” in a poem, and wrote an occasional brief article on the subject. The early years of the new century were absorbed with the madness and futility of war, principally in Iraq. But in 2007 the striking summer retreat of the Arctic ice sheet required me to drastically rethink my priorities and activities. I started by trying to form a Climate Change party that appealed across the political spectrum called the Global Warming Action Party Australia. The acronym GWAPA amused my daughter who told me the name was a joke and sounded like a frog croaking. She was right and I am still searching for a political party of this kind.

One previously strong argument against climate change was the ‘pause’ in global temperatures between 1950 and 1980 until they resumed their upward trends in the 1990s. It has recently been argued that this ‘pause’ may have been influenced by atmospheric nuclear testing – creating a mini ‘nuclear winter’. Some well qualified friends treated the idea with extreme scepticism and concluded that there was not enough ‘dust’ from the atmospheric tests to have caused the pause. Thus the evidence that a mini ‘nuclear winter’ halted the warming between the 1950s – 1980s, or even contributed to it, is unsubstantiated. Could the atmospheric nuclear tests have contributed to the warming pause? Along with other factors such as particles of lead additives from petrol in the atmosphere? Science hopefully will eventually identify the cause or causes. In the meantime those interested can read the article at