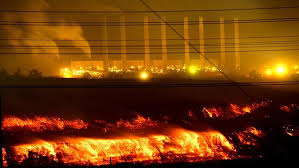 Brown coal, or lignite, is the major contributor of greenhouse gases in Victoria where it still provides about 80% of the state’s electricity. It is a low grade fuel with its energy values approximately that of dry hardwood firewood of the same weight. There are a large number of reasons why all coal – and especially lignite – is harmful and should be left in the ground. Global warming is the predominant concern. But many of these other harmful aspects of brown coal electricity generation – like flood and fire in the open cuts – will undoubtedly be exacerbated by the warming.

The global warming that has already occurred over the last century – about one degree centigrade across the earth – has been caused mainly by the combustion of coal. A worst case business as usual future scenario will cause at least a 4 degrees centigrade rise in the earth’s average temperature and make large parts of the globe uninhabitable. Victorian brown coal electricity generators contribute approximately 10% of all greenhouse gases in Australia annually. Every year they produce approximately more than 200 million tons of CO2 – the most damaging of the greenhouse gases. If humanity cannot rapidly reign in its greenhouse gas production the predictions are dire. Already with one degree of warming in Gippsland we are experiencing increased heatwaves, drought, floods and bushfires. It is imperative that we phase out brown coal and switch to renewable energy as quickly as possible.

There are a number of other reasons why this should be done immediately including the continued threat of both floods and fire to electricity production; the health threats to those in the Valley from air pollution and coal dust; the threats to wider Gippsland from heavy metal pollution including mercury; the substantial consumption of a scarce resource – water – by the power generators; the threat of land slips and subsidence to Valley communications and the wider threat of subsidence to the Gippsland coast.

For most of the twentieth century the Latrobe Valley generators have been the ‘life blood’ of industrial Victoria. It was not until the late 1980s and early 1990s that doubts began to be expressed about pollution and climate change which are now obvious to almost everyone. Brown Coal is the new asbestos, but many times worse. It is already causing an unknown number of fatalities, both here in Gippsland and more generally across the earth as the extreme weather events exacerbated by global warming become more frequent and severe.